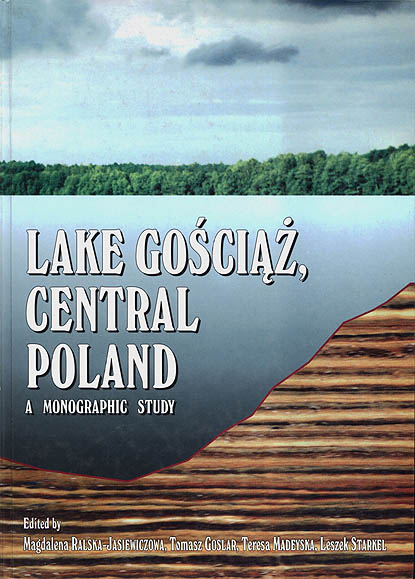 Lake Gościąż in central Poland contains one of the longest and best preserved sequences of annually laminated sediments known from central Europe. It forms a unique archive of environmental history during the last 15,000 years recorded on the calendar timescale. The nearest localities of varved lacustrine sediments of similar quality and time span are known from the crater lakes in the Eiffel area, Germany (Zolitschka 1989, Negendank 1989 and following papers). In other central European sites containing such type of sediments, the annually laminated series cover shorter time sections (Merkt 1971, Lotter 1989 and following, and others). More frequently, the continuous series of varved gyttjas occur in lakes of northern Europe, as reported from N. Sweden (Renberg 1976 and following) or N. Finland (e.g. Simola 1977, Saarnisto 1985, Tolonen 1980, and other papers), but they do not include late glacial times.

Lake Gościąż belongs to a complex of four connected lakes (Na Jazach lake system) located in a small lake district formed in the marginal part of last Scandinavian ice sheet, which, because of a distance of less than 80 km from Warsaw, is readily visited by scientists from Warsaw University. During the student field course in spring 1985 lead by Dr. B. Wicik (Institute of Geography, Warsaw University) and Dr. K. Więckowski (Institute of Geography and Spatial Organization, Polish Academy of Sciences), the first core, 15.85 m long and laminated in its full length, was obtained from the centre of Lake Gościąż. The rough attempt by Dr. Więckowski to count the laminae number gave the result of 12,600±600 (Ralska Jasiewiczowa et al. 1987, Więckowski 1993). It supported the supposition that the laminae are annual and the whole profile covers the full Holocene, entering also into the Late Glacial. None of other seven lakes cored by Więckowski and Wicik in the Gostynińskie Lake District revealed such a sediment sequence, though in some of them the periodical lamination covering shorter sediment sections was found.

The uniqueness of the discovery stimulated the interest of scientists of different specialities. This was a time when the IGCP 158 project team started to elaborate the conclusions. In 1987, from the initiative of Prof. L. Starkel, a multidisciplinary team for the studies of Lake Gościąż led by Prof. M. Ralska Jasiewiczowa and affiliated to the National Committee for Quaternary Research, Polish Academy of Sciences was organized, and the preliminary project draft was outlined in its first shape. The project aimed to achieve, by cooperation of scientists representing different fields of palaeoecology, geophysics, sedimentology, and other geosciences, the model of environmental and climatic changes during the Late Glacial and Holocene representative for eastern central Europe, grounded on a precisely built up calendar timescale. In addition, the construction of full calendar chronology over the last 13,000 years could offer the possibilities to verify the chronological scales used hitherto, the radiocarbon timescale included. To understand well the past changes, the genuine and detailed knowledge of the recent environment of the area and of the lake hydrologic and eco systems was also required, as well as the information on the history of past human settlements in the region. As the existing source data appeared deficient or absent, special investigations on these subjects were also planned.

The field works and first laboratory analyses started since 1987 were partly supported by funds from the Central Program of Basic Research (CPBP): No 03. 13 Evolution of the environment of Polish Territory (field coring, 14C dating and laminae counting, mineralogy) and No 04.04. Flora and vegetation, their changes and endangerments (recent flora and vegetation, lake hydrobiology), and partly from the budgets of W. Szafer Institute of Botany, Polish Academy of Sciences and other participating institutions. However, the financial situation of the project was very difficult, delaying the systematic progress of all works. After the financing system for science was changed in Poland in 1991, a complex grant lead by Prof. M. Ralska Jasiewiczowa was allocated to the project Record of environmental and climatic changes during the Holocene in the annually laminated lake sediments by the State Committee for Scientific Research (Project No 6 0252 91 01, the realization time 01.11.1991 –30.09.1994). The grant was used entirely for supporting the field and laboratory works in different participating disciplines. Besides, the investigations of a few particular colleagues were supported from individual SCSR grants: T. Goslar – 6 6410 91 02 (Calibration of radiocarbon time scale in the Late Glacial), T. Kuc (The influence of anthropogenic factors on the concentration of stable and radioactive isotopes in the atmosphere), P. Wachniew – 2 2393 91 02 (The isotopic composition of calcareous lake sediments as indicator of climatic change). The funds appeared, however, insufficient to enable the full execution of analyses as originally planned. It affected first of all the chemical/mineralogical and diatom analyses, which have been performed incompletely and still need continuation.

In spite of these and still other shortages that will be mentioned later, most of the field and laboratory research has been executed. The full scope of investigations on recent environmental conditions of the lake system and of the surrounding region has been completed; the archaeological surface survey of area around the lake was done and supported with excavations at selected sites. The calendar chronology of annually laminated lake sediments has been established and confirmed with the representative series of AMS 14C datings. Based on this chronology the sequence of various environmental changes has been reconstructed with the average time resolution of 50 yrs. The strategy of palaeoecological studies was as follows: the analyses of cores from the central lake deep and also from the western deep in their Late Glacial part, performed on continuous varved sediment sequencies, were focused first of all on regional changes. Highest importance was attached here to the precise dating of recorded events. The studies on cores from the lake margins and from neighbouring depressions were focused mostly on local changes of ecosystems and on hydrologic changes. They formed an individual study (D. Demske, Ph. D. thesis, msc.), meant to be published in the second part of the Lake Gościąż monograph. As it appeared, however, the marginal cores contained non laminated sediments deposited during the older part of the Late Glacial and were absent from the lake centre, where the sedimentation processes started during the late Alleröd only. Therefore, the results of analyses from some of marginal cores (pollen, plant macrofossils, Cladocera) have been used to complete the sequence of events recorded in Lake Gościąż before the sediments in its central parts started to accumulate.

Some gaps in the project completion should still be mentioned:

– The palaeomagnetic investigations failed due to inadequate core collection and lack of proper field equipment (Sandgren 1993);

– Various environmental maps are based on the old cartographic materials because our efforts to get the updated topographic survey of the lake and its surroundings (1:500) were accomplished very late;

– The pollen analytic reconstructions lack the short time scale based on very fine annual sample resolution that would show the detailed sequence of vegetational changes following events like a rapid change of climate, the expansion of a tree species (e.g. Alnus), the spread of a disease (Ulmus fall), or drastic human action. These deficiencies, resulting from the lack of time and personnel are planned to be completed and presented later;

Some detailed topics of the Lake Gościąż project (e.g. the radiocarbon and calendar chronologies of the Younger Dryas cold period, vegetation development during the later part of Late Glacial, impact of Mesolithic and Neolithic man on the environment, fine resolution studies of top sediments, Late- Glacial and Holocene water level changes in the lake) have already been described in international journals (Goslar et al. 1993, 1995, 1998, Ralska Jasiewiczowa & van Geel 1992, Ralska Jasiewiczowa et al. 1992, Starkel et. al. 1996). The results of some studies (e.g. of varve chronology of the Lake Gościąż sediments, stable isotope composition of modern lake water and sediments) were used indirectly in publications, but these studies themselves have never been described in detail. Such complete studies as e.g. the development of vegetation throughout the whole Late Glacial and Holocene are published now for the first time. The scope of this book, which we call A Monographic Study, Part I is to document, as fully as possible, all the data collected till now. Therefore, partly because of limited space and partly because in some topics it would be premature, we decided not to discuss in detail the reference of our study to the relevant regional or global elaborations, but we focused our discussion on the evolution of the Lake Gościąż system itself, in a rather local scale. This volume will thus serve as a background for further studies and more general discussion, which we plan to develop in the coming parts of the monograph.

We would like to acknowledge here those persons whose enthusiastic help and support were crucial for the overall progress of the Lake Gościąż study, beyond the particular subjects of individual chapters.

First, we'd like to recall the excellent job of Drs. K. Więckowski and B. Wicik (Fig. 1.2), collecting the sediment cores during several winter campaigns. It was due to them that the laminated sediment for analyses was available at all.

We would like to express our cordial thanks to the authorities of the Włocławsko Gostyniński Landscape Park, who permitted us to undertake our activities within the area, for their interest and universal help during the multiseasonal fieldwork. We are especially grateful to the Director of the Landscape Park, Mr Andrzej Drozdowski, whose enthusiasm and personal engagement greatly influenced the effectiveness of our coring campaigns.

We'd like to stress the enormous effort of the late Prof. Mieczysław F. Pazdur, Gliwice Radiocarbon Laboratory, Silesian Technical University, Poland, who stimulated and supported financially the elaboration of radiocarbon and varve chronologies of the Lake Gościąż sediments. In our early attempts to work with the sediments, we benefited by the kind help of Dr. Joseph Merkt, Niedersächsiches Landesamt für Bodenforschung, Hannover, Germany, and Prof. Matti Saarnisto, University of Oulu, Finland, who shared with us their experience in interpretating the annual sediment structures and retrieving the cores of soft sediments in the frozen in situ form. The photographic documentation, separation of samples, many computational analyses, and collection of frozen cores, were done with the valuable help of Dr. Adam Walanus, Silesian Technical University, Gliwice, Poland. When collecting the sediment samples, we also had the kind assistance of Mrss. Danuta Moszyńska Moskwa, Zofia Tomczyńska, and Małgorzata Zurzycka, W. Szafer Institute of Botany, Kraków, Poland. The laboratory preparation of pollen samples from G1/87 reference profile was performed at the Hugo de Vries Laboratory of Amsterdam University. For that help and support we should like to thank Dr. B. van Geel and the technicians who did the work. Special thanks we address to Prof. Herbert Wright Jr., University of Minnesota, Minneapolis, U. S. A, who was the first reader of all manuscripts, for his positive opinion, valuable comments and remarks, and linguistic improvement of the text. The editor's office has been held by Mrs. Ewa Madeyska, W. Szafer Institute of Botany, Kraków, Poland, who collected and completed the manuscripts and graphs, made the correspondence and with endless patience retyped the manuscripts introducing all necessary corrections. 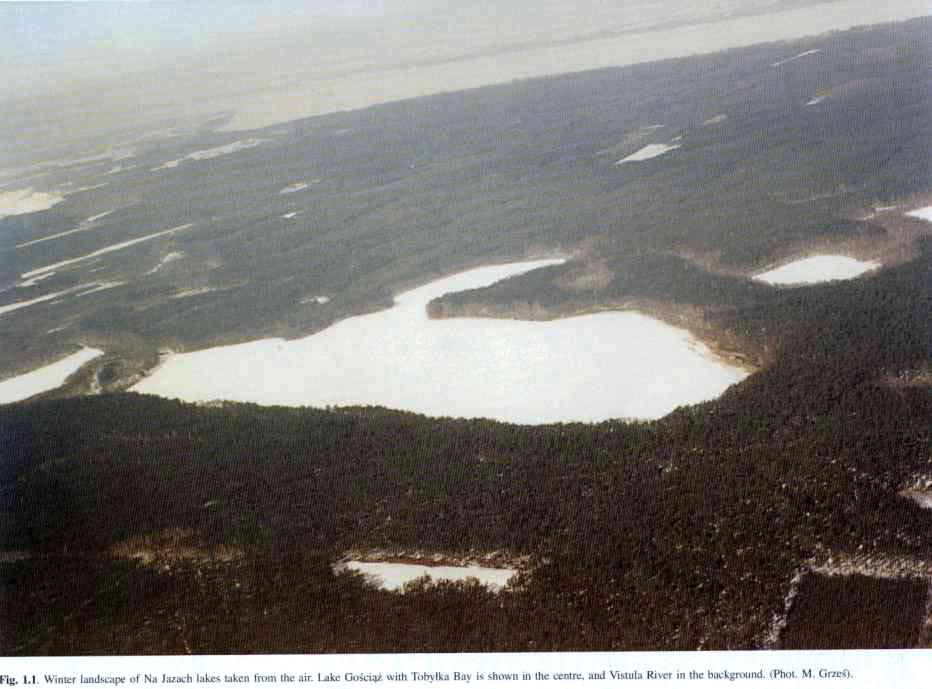 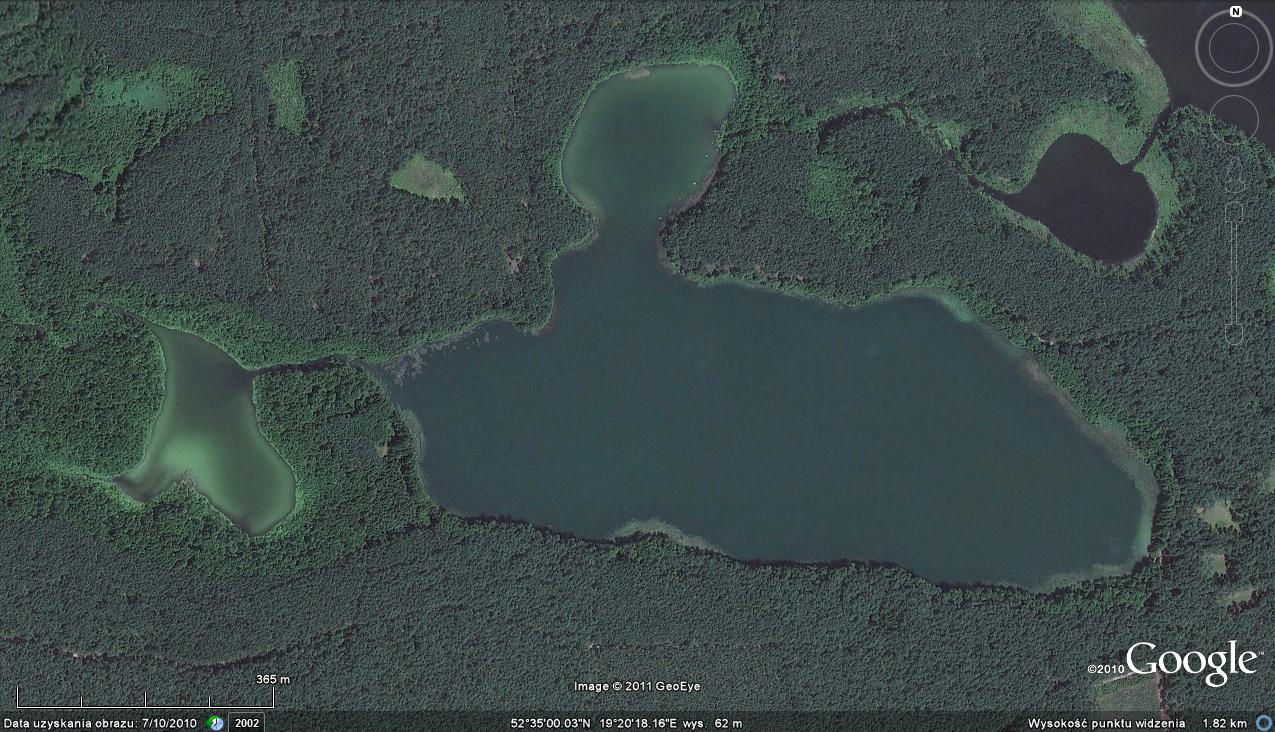 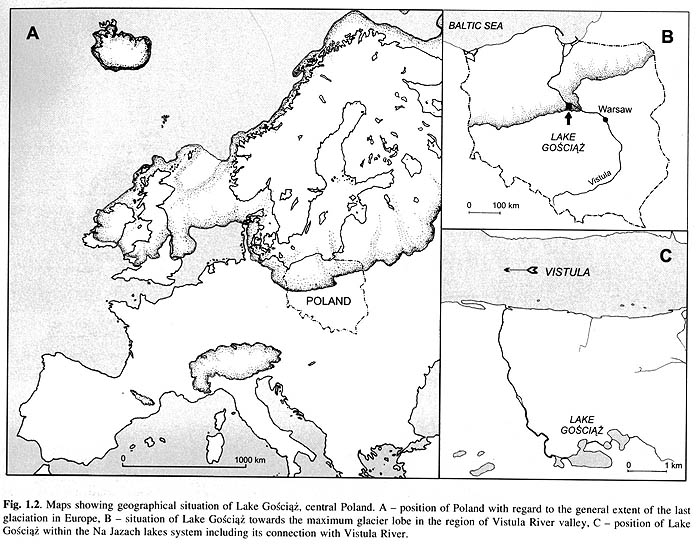 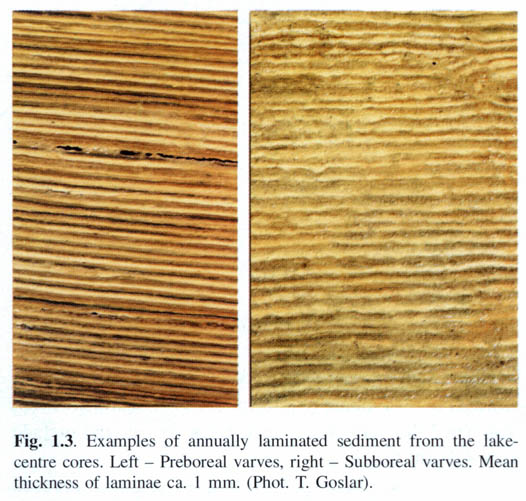 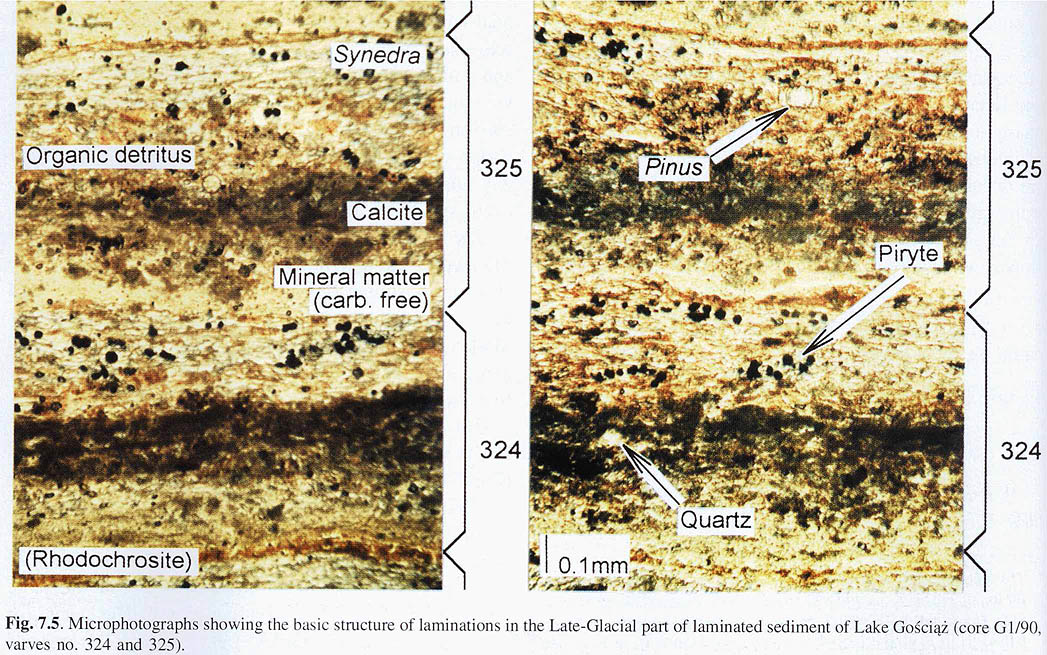 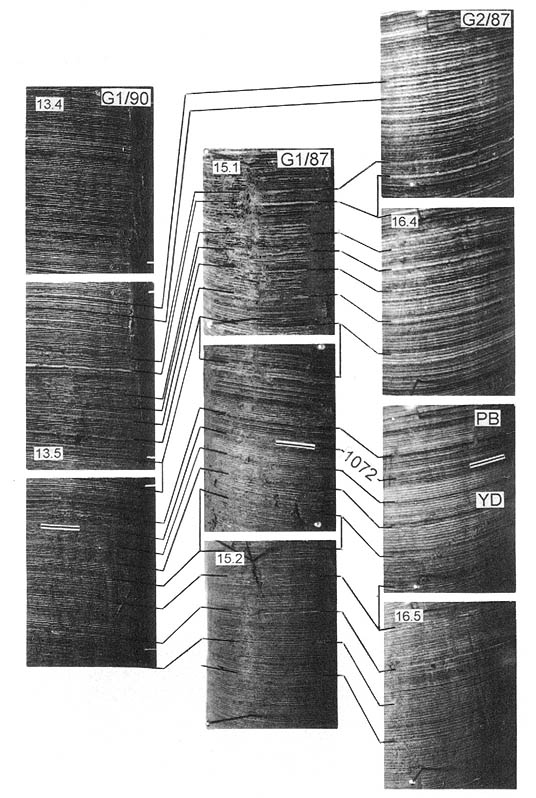 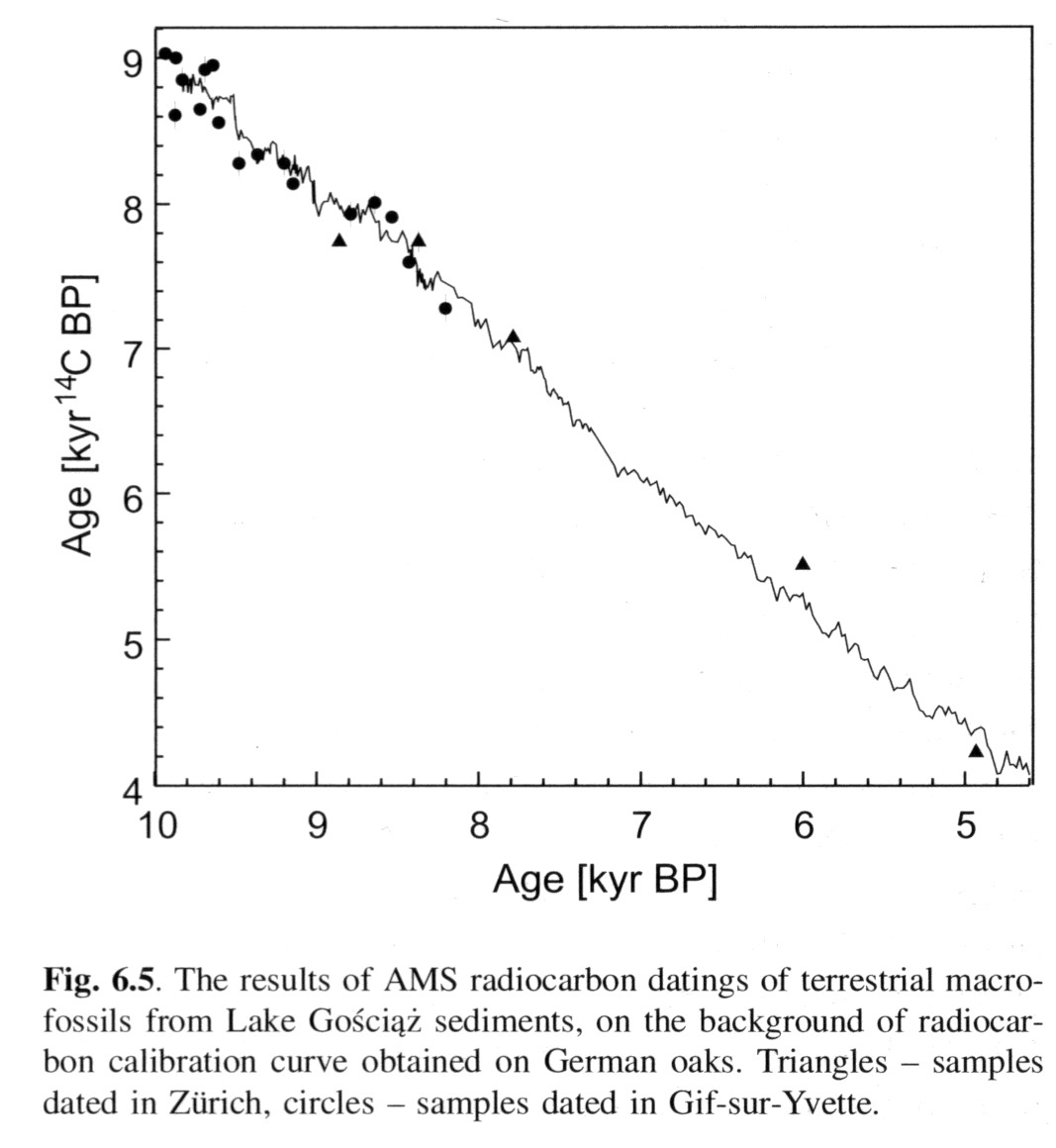 4.9. Walanus A. Statistical methods in the interpretation of the analytic results 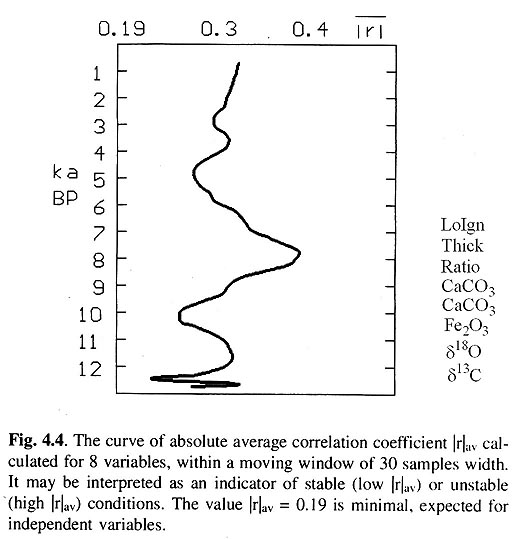 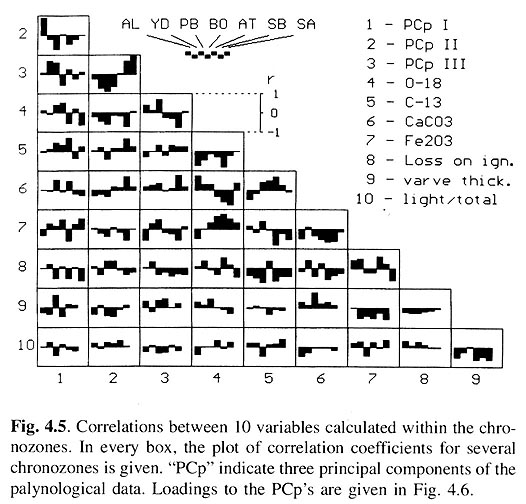 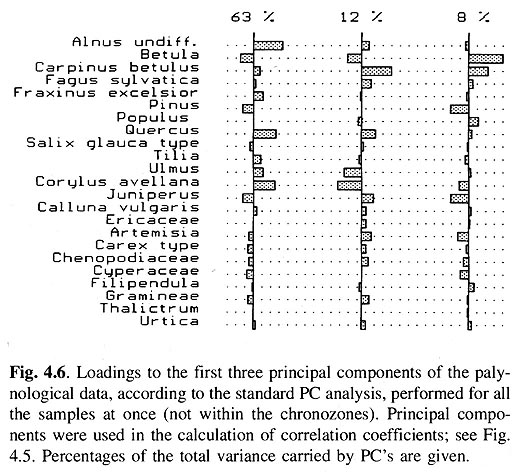 6.5. Walanus A. Statistical analysis of the sequence of laminae thickness 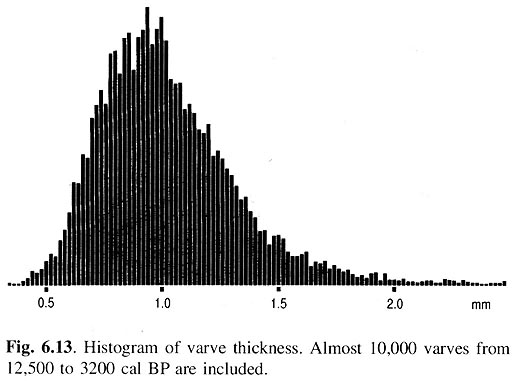 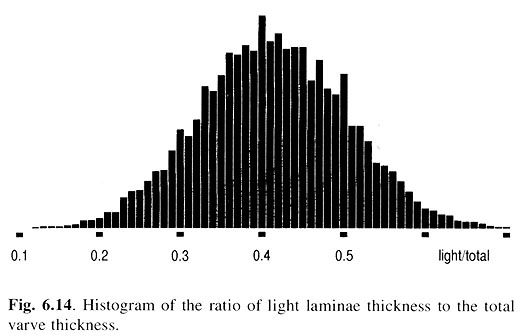 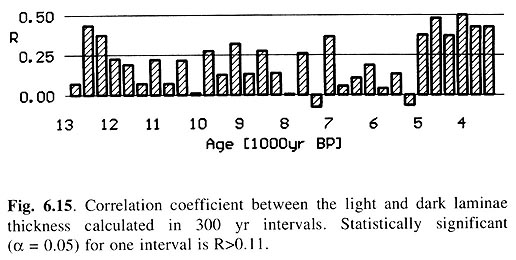 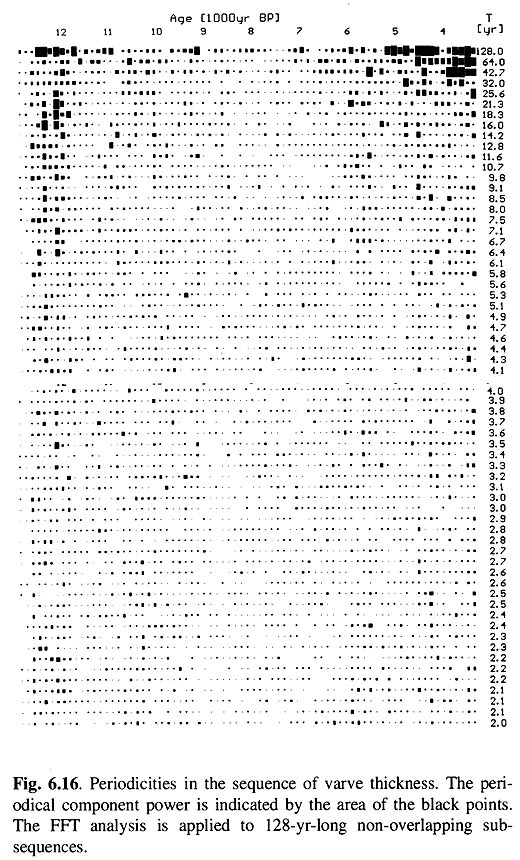 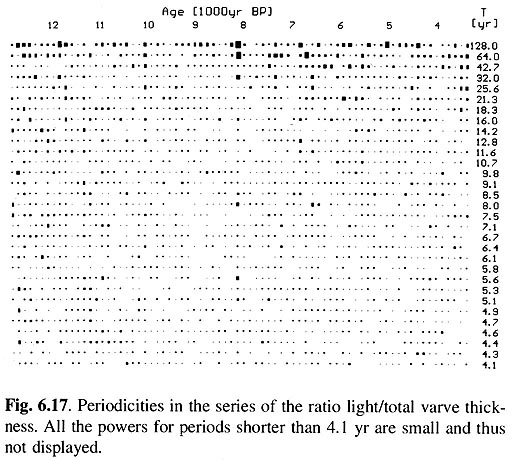 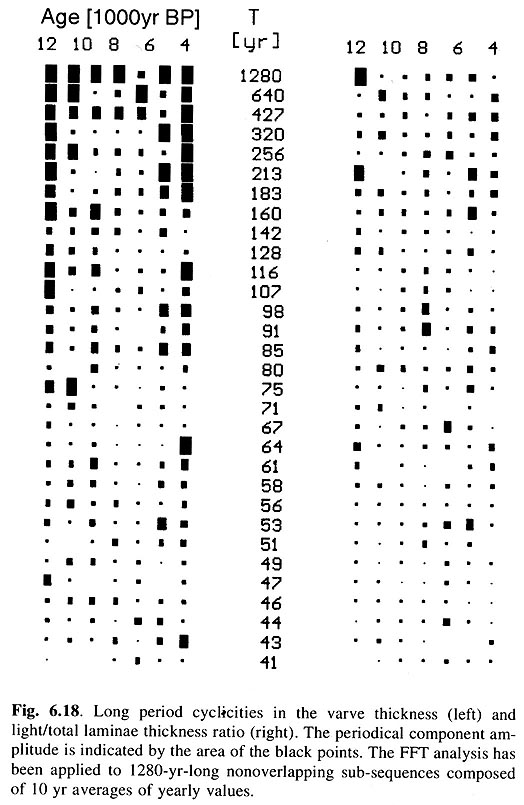 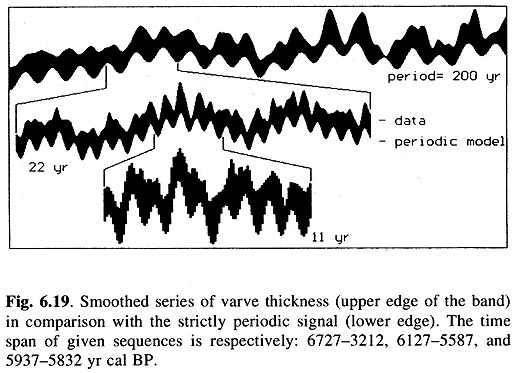 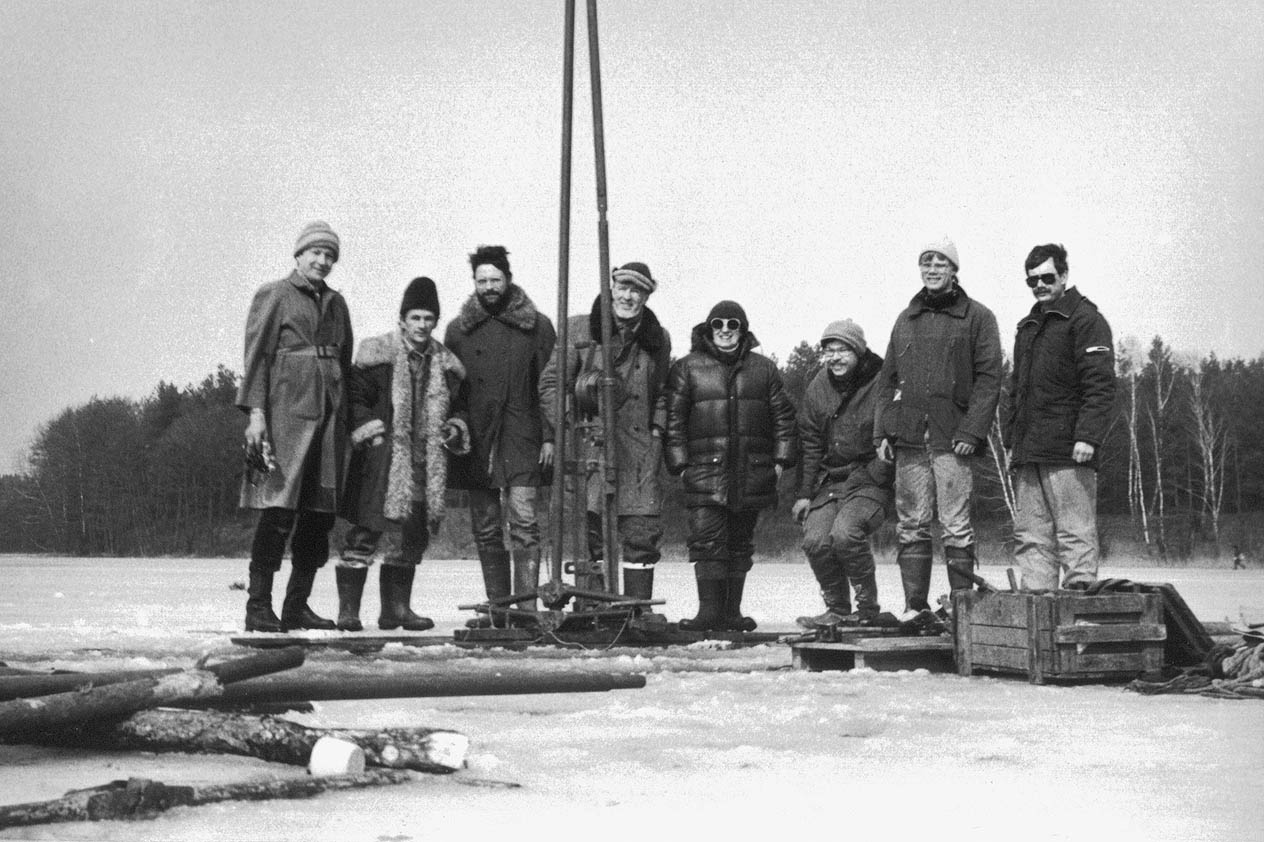 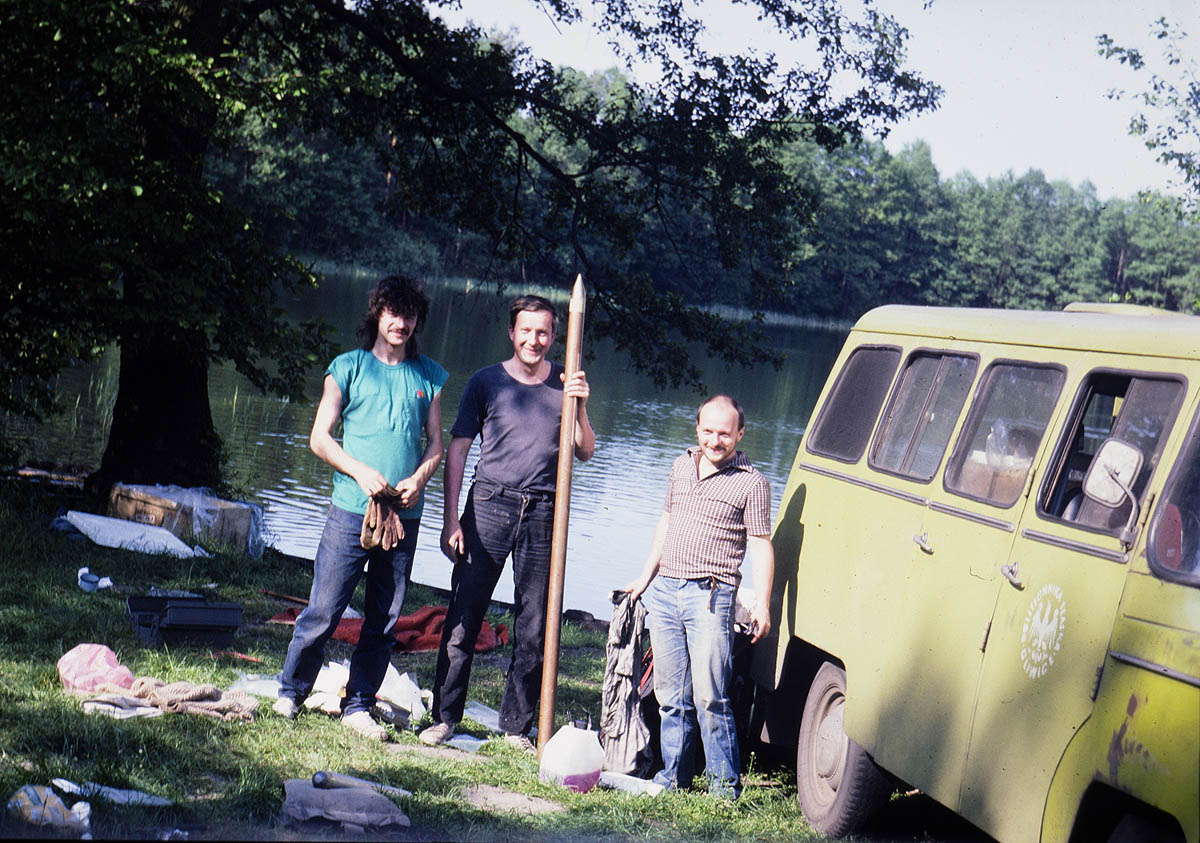